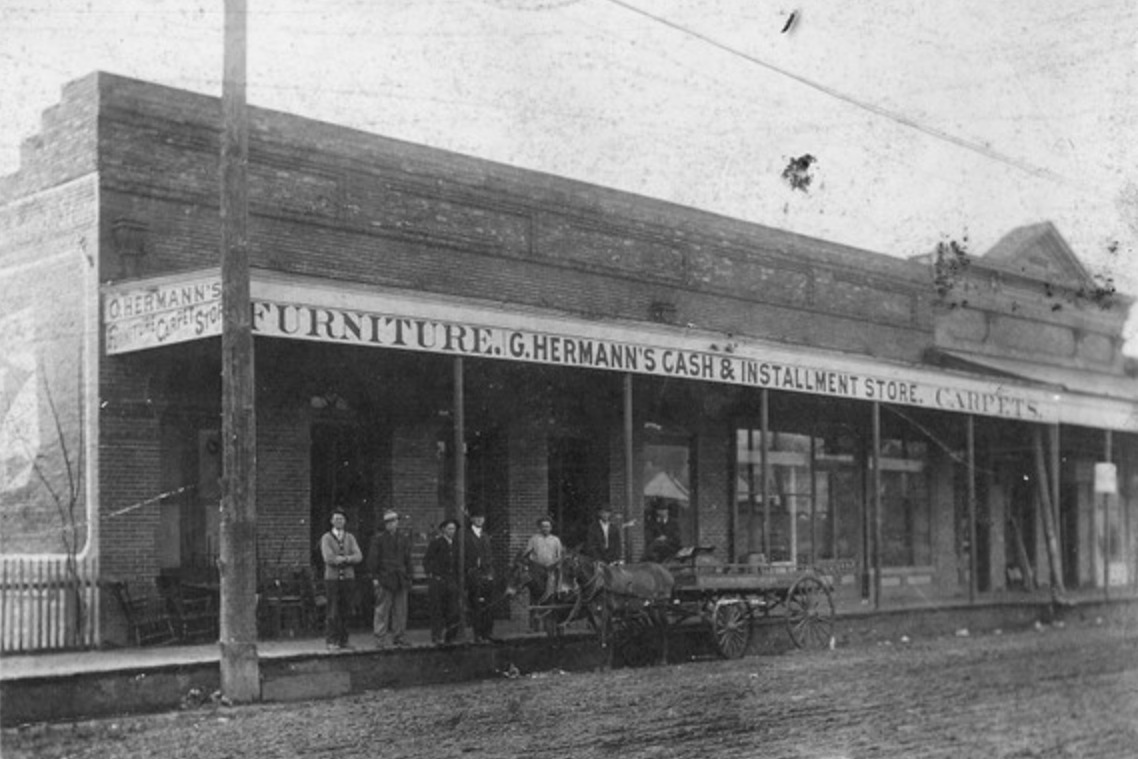 Five generations ago, Gottlieb Hermann, a German immigrant, moved to Washington County, Texas where he earned his citizenship and became a Texan. Using skills learned in the old country, he perfected his trade in his new community. In 1876 Gottlieb began to live the American dream and opened G. Hermann Furniture.

Life was simpler, but not easier. In the early days of the store, furniture was delivered and sold in wagons. If the customers didn’t come to the furniture store, the furniture went to them. It was not uncommon for Gottlieb or one of his employees to load a wagon, take off around the countryside and not return until all the items were sold. When the first washing machines were invented, they were demonstrated by the traveling salesman in the prospective customers’ homes. People from miles around would bring their laundry for the demonstration.

The late 1800’s were a prosperous time for Brenham and Washington County. As the community grew, so too did the store. Gottlieb added more modern and finer brands of furniture helping to define his rapidly changing frontier community. The reputation of the quality grew and the store expanded to seven locations throughout Texas.

The original and only remaining Hermann store of the seven began in downtown Brenham. The store is located in a building of fine German architecture and craftsmanship where it has remained to this day, a treasure of our historical heritage.

Gottlieb remained a fixture in the store, constantly expanding and improving the quality of the merchandise. He passed the store to his sons Ernest and Will Hermann and in doing so began this Texas family tradition.

Ernest and Will steered the Brenham store through the difficult times of the depression and World War II. Ernest, having no children of his own to follow in the family business, turned to his nephew, Alfred, to continue the business. Alfred became the third generation of Hermann’s to run the store. In 1974, Alfred died unexpectedly. His son John would become the fourth generation of Hermann’s to run the family business, and continues today. John acquired the adjacent building and expanded the store to its current size. 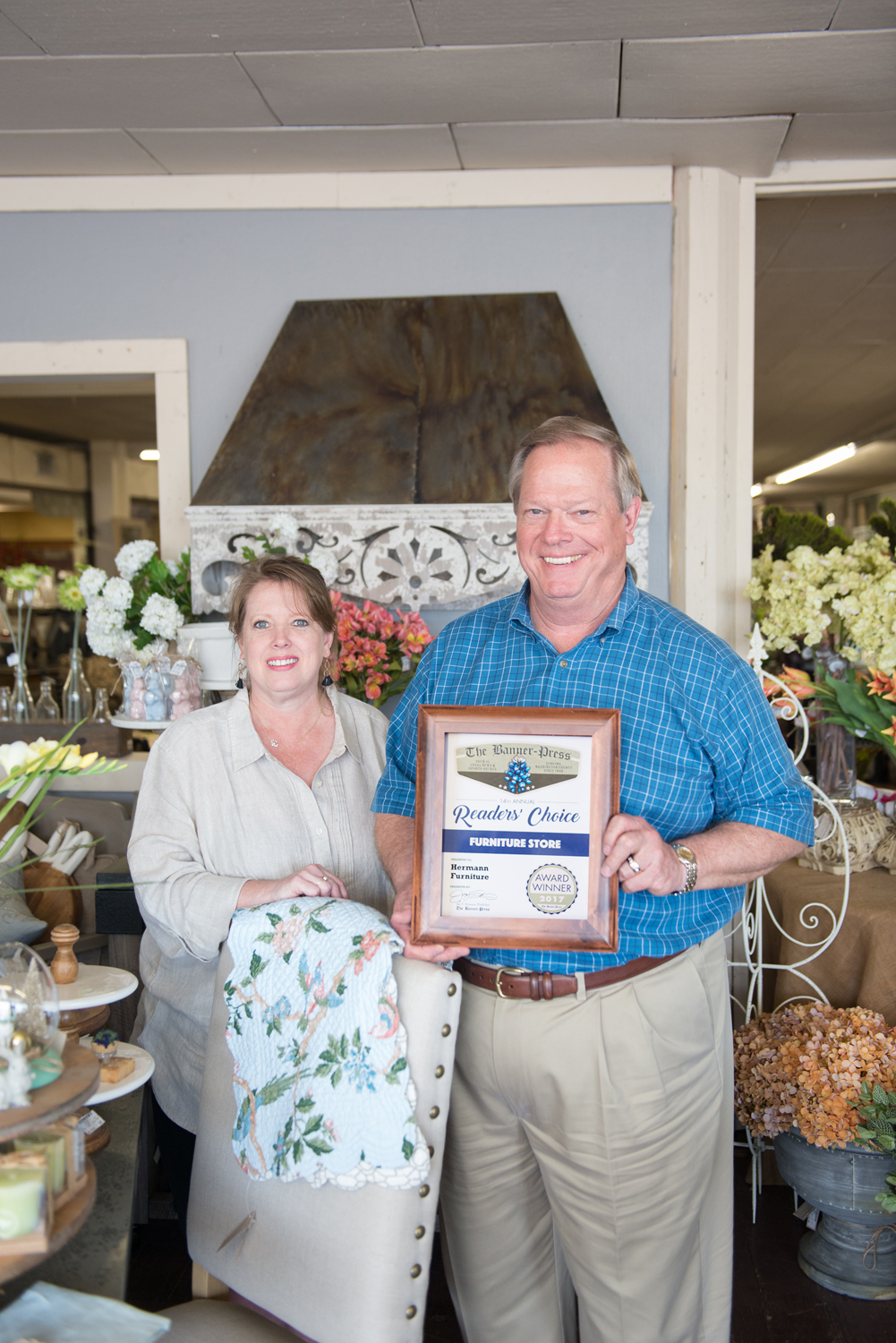 John kept the family business growing, but it was the addition of his daughter, the fifth generation, Jennifer Hermann, whose creative talents have made the store the unique and well-shopped Hermann Furniture that we see today.

The store has been a part of Jennifer’s life from the time she was a youngster, enjoying riding on the cargo elevator to being pushed on the furniture dolly throughout the store. It seemed only natural for her to join forces with her father.

God, Family and Community, are the cornerstones of this family and their business. The Hermanns give back to the community as much as they receive, which makes their community service and leadership very well received and appreciated.

From the moment you walk through the door, you know that Hermann’s is unique.  The ambiance of the old building is the perfect setting for the experience that awaits the customer. A fabulous selection of interior furnishings and accessories blend to create the kind of shopping experience that makes you feel good. It’s the kind of place you want to visit often for the ideas as well as the merchandise. Customers of Hermann Furniture come from all over Texas and take advantage of the delivery within a radius that includes Houston, Bryan and Austin. Even out of state visitors make Hermann’s a part of their travel itinerary.

Perhaps it is because of the deep-rooted small town traditions or from being fifth generation family owned, but Hermann customers receive the kind of personal service that most stores don’t offer anymore. In fact, most customers are recognized by their name if not at least by their face. That is part of the reason Hermann Furniture is the destination for many regular shoppers from Houston, Bryan and Austin areas.

Because of Hermann Furniture’s unique qualities, they have been honored to become a Flexsteel “Gallery”, and a Kincaid “Gallery”.

The design studio section of the store offers thousands of fabric samples for the customers to customize upholstery selections. Additionally, a designer is on staff for assistance.  Customers are encouraged to check out fabric samples to view them in the interior space where the piece will be used, to make sure the fabrics will coordinate with existing colors and lighting. Resource catalogs are available for customers to broaden their search. For the very discerning customer, in-home consultations, as well as a trip to the Design Center, are options.

Hermann’s also offers a full line of home accessories and gifts for all occasions. In the spirit of its past, Hermann’s has continued to expand. Hermann’s “Backdoor” was added to offer garden and floral design accessories. Hermann’s is always changing and growing. Come see where the store grows next!